Over fifteen years ago, the authors of the Budapest Open Access Initiative (BOAI) agreed upon a text outlining the importance of Open Access to scholarly materials. They asserted: “By “Open Access" to this literature, we mean its free availability on the public internet, permitting any users to read, download, copy, distribute, print, search, or link to the full texts of these articles, crawl them for indexing, pass them as data to software, or use them for any other lawful purpose, without financial, legal, or technical barriers other than those inseparable from gaining access to the internet itself. The only constraint on reproduction and distribution, and the only role for copyright in this domain, should be to give authors control over the integrity of their work and the right to be properly acknowledged and cited.” Since the text was published in 2002, the idea of Open Access has taken root and spread widely around the world.

In this sub-essay, I include work looking at the notion of "openness" as it relates to scholarly knowledge and infrastructures. The concept of openness has been increasingly taken up by development agencies and funders including the same tech philanthropists mentioned earlier in the essay (e.g. Gates Foundation). The concept of openness and how it is leveraged by different agents working in technology, development and research in Africa is of relevant for my dissertation project.

Over the last few years, a body of literature has been growing that notes that while increasing access is an important start, it may not be enough. For example, mobile for development (M4D) researcher and practitioner, Jonathan Donner published a book entitled “After Access” (2015) highlighting that while the boom in mobile phone coverage around the world has improved access to the Internet, it has brought about new forms of digital stratification. In other words, power inequalities continue, even in an “after access” world where more people have access to the Internet (and other online resources). Donner debunks the proposition that the “digital divide” has been closed because more people have mobile devices. Rather, as Donner highlights, mobile access has brought about both new spatial-temporal potentialities as well as new forms of digital stratifications.

Another strand of growing critical work raises concerns that Open Access is increasingly being co-opted by multinational publishing companies like Elsevier and Sage for private profit. Posada and Chen (2017) argue that as big publishers move towards openness they have also been redirecting their business strategies towards the acquisition of scholarly infrastructure as part of processes of profit maximization. They provocatively ask if our attention on the access paywall has distracted scholar activists from paying attention to the strategic takeover of infrastructure by the publishers. This work is important to consider as we think about what the implications might be for the African university (and university systems more broadly). 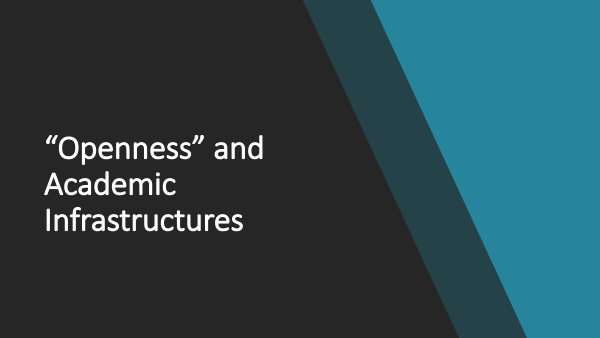