Bretton Woods and Investments in Education for "Development"

In the World Bank’s 1974 Education Sector Policy Paper, it was argued that educational content in developing countries was “dysfunctional” because it was “more theoretical and abstract and less practical” (World Bank 1974). Such rhetoric paved the way for the Bank to restrict government borrowing for secondary education investments solely towards physical infrastructure such as metal and woodshops for boys, and materials for domestic science for girls as these subjects were thought to be more “practical” (Heyneman 2003).

As late as the 1990s, the World Bank (1988, 1994) suggested that Africa had no need for universities because the return on investment was too low and unjustifiable. The Bank argued that Africa would be better served by investing in primary education and vocational education, and it was assumed that training African students in universities abroad would be cheaper, more cost effective and beneficial. Malawian historian Paul Zeleza (2007, 2016) has noted that more recent World Bank publications and pronouncements suggest a radical rethinking of the anti-university orientation of the 1990s, although this has not come with any admission of the Bank’s earlier position or acceptance of responsibility for severe damages to the university system across the continent as a result of World Bank’s policy influences on African governments. For example, a World Bank report published in 2017 asserted that despite Africa’s newly independent governments investing heavily in education and training in the 1960s, it was “the first oil crisis in the early 1970s and the subsequent collapse of many African economies caused by the concurrent effects of corruption and increasing indiscipline in public budget management” that put many African universities under significant strain, with negative implications for their management and performance. We see no mention of the World Bank’s fundamental role in crippling African universities through their enactment of severe austerity measures and economic reforms. Instead, the blame is pointed at Africans for their supposed corruption and indiscipline in budget management.

While the World Bank today appears to be placing importance on developing Africa’s higher education system (2016, 2017), the strong market-instrumentalist logic permeating its approach decomposes any notion that higher education is valued as a public and intellectual good. With market imperatives and ideology increasingly reigning supreme, universities (both in Kenya, Africa, and the West) are increasingly compelled to seek valorization for their private and vocational good. This disintegration of the notion of education as a public good enables outside interests to lay claim to filling the perceived skills gap left by African universities through trainings, either sponsored or paid for by the World Bank and techphilanthropic organizations like the Chan Zuckerberg Foundation. 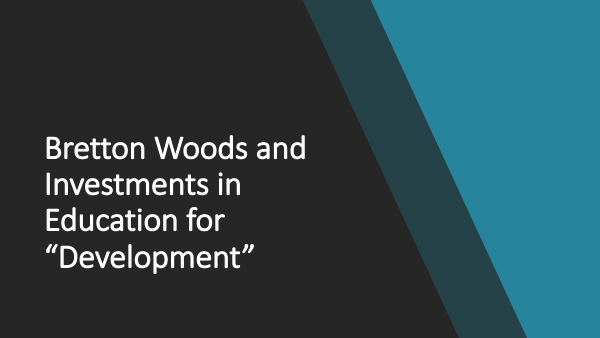