Analysis of Collaboration in Political Practice/Praxis

This section foregrounds annotations based on our analytic structure specifically looking at collaboration in political practice.

For some analysts, collaboration at this phase meant negotiated alliances between researchers and stakeholders broadly speaking (Wood and Gray 1991; Fortun and Cherkasky 1998); for others, it explicitly meant researchers and community activists (e.g. Cervone 2015). Analysts differed in their perspectives on what constituted “good” collaboration. For example, Fortun and Cherkasky viewed collaboration as a politics of difference, “drawing in people with different interests, perspectives and skills into synchronized effort to accomplish something that could not be accomplished individually." They found that for collaboration to work, diversity or pluralism must be turned into a resource. Because collaboration requires and establishes difference, they found collectivity can not only be difficult to produce but also can be marginalizing and alienating. This echoed a point raised by Cervone (2015) who called collaboration “mutifaceted and rhizomic” and asked if it might be too weak of a word to describe the entanglements of complicity, cultural orientation, suspicion and paranoia, commitment and intimate involvement, credit and authority, and the production of reliable knowledge for partially articulated goals.

This is quite distinct from other readings of collaboration which honed in on the sharing of values and lines of similarity over difference. For example, Handgraaf and van Raaij (2005) viewed collaboration as cooperation and noted an increasing convergence between psychologists and economists. Rather than being a growing field of "cross" or "inter" disciplinary collaboration, the analysts noted that those working on the topic are becoming more similar to each other rather than working across differences. The analysts suggested that the growth of more economic psychologists/behavioral economists is particularly beneficial for society because it helps to increase the efficiency of "interventions."

Most analysts explicitly discussed collaboration as a process but had different perspectives on what the end goal of such processes and negotiations were, with some holding the assumed goal of collaboration as being arrival at a shared (stable) problem domain and every stakeholder’s place in it (Wood and Gray 1991) which is a goal starkly divergent from what Fortun and Cherkasky (1998) describe as the ongoing formation of new social alliances through the generation of new explanations and avoidance of grand theorization. 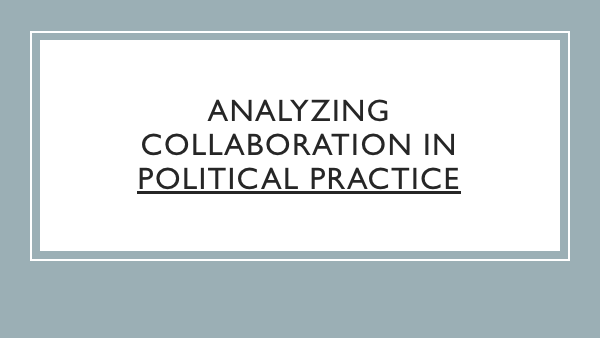