Analysis of Collaboration in Artifact Production

This section foregrounds annotations based on our analytic structure specifically looking at collaboration in artifact production.

Collaboration at the phase of artifact production was described as co-authorship between two or more people. This was largely collaboration across disciplines (Lukkonnen et al. 1992); stages of training/education (Cerwonka and Malkki 2007); and institutions (Kaplan and Rose 1993; Appleton et al. 2018). The analyses described the technologies used to facilitate co-authorship across space and place given that most collaborators were not physically in the same geographic location. Kaplan and Rose (1993) noted that making arrangements to work in person was still very important despite lack of time and conflicting institutional schedules and duties making it challenging to coordinate. Cerwonka intended the book as a way to open up discussions about unique epistemological and methodological roadblocks in interdisciplinary work.

Grounded in dependency theory, Lukkonnen et al. (1992) discussed collaboration in terms of trans-national institutions co-authoring in the sciences. They hypothesize economic reasons as to why collaboration takes place (lack of material equipment and resource sharing as the primary drivers for collaboration) and then cannot adequately answer why collaboration happens often in a theoretical driven field like mathematics. Their data (a database of journal publications) does not help them to answer the "why" questions they pose.

Reviewing types of collaborative formations between researchers, the Matsutake Research Group described two ends of the spectrum, the "Big Science" model (where labor is divided and framed around a stable research object) and "intimate co-authorship" which requires ongoing discussion and an investment of emotional labor. Kaplan and Rose's piece exemplifies the "intimate co-authorship" model, noting the "intellectual and emotional synergy" that resulted from years of working together. Intersecting, the two co-authors use the "we" voice throughout (vs the Matsutake Group which distinguish between speakers for the most part). Whereas the Matsutake Group are keen on promoting multivocality by agreeing to disagree and maintaining productive tensions within the collaborative endeavor, Kaplan and Rose (along with many others) note their similitude: "we are both feminists and the same kind of feminists” (548). They describe their collaboration as a "lesbian collaboration" that is equal and lacking in heirarchical power relations.

Not unlike what James and I are doing (although ours is more of a joint query whereas Cerwonka and Malkki was more heirarchical between advisor and advisee), Cerwonka and Malkki (2007) use their email correspondence to make explicit what is usually left unsaid (esp. within a discipline). They therefore foreground their email communications as their "data" and include an intro and conclusion written by Cerwonka and Malkki respectively to contextualize the emails. Interestingly, the co-authors do not reflect much on the process of putting the book together, largely focused on their exchanges about methodology while Cerwonka was in the field. 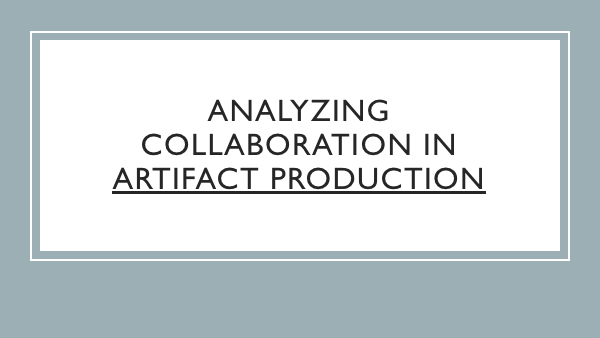