Experimental systems are the working units a scientists or a group of scientists deal with...

Such systems must be capable of differential reproduction in order to behave as a device for producing epistemic things whose possibility is beyond our present knowledge, that is to behave as a “generator of surprises.” “Differential reproduction” refers to the allowance, if not to the necessity, of shifts and displacements within the investigative process; in order to be productive, an experimental system has to be organized so that the generation of differences becomes the reproductive driving force of the whole experimental machinery….

The articulation, dislocation, and reorientation of an experimental system appears to be governed by a movement that has been described as a play of possibilities. With Derrida, we might also speak of a “game” of difference.

[O]ne never knows exactly where it leads. As soon as one knows exactly what it produces, it is not longer a research system. An experimental system in which a scientific object gathers contours and becomes stabilized, at the same time must open windows for the emergence of unprecedented events.

Valuing “noise” and inventing new ways to make sense of it is, in some ways, only a re-iteration of how the natural sciences proceed. Biologist, philosopher, and historian of the life sciences Hans-Joerg Rheinberger understands the growth of scientific knowledge in terms of “experimental systems:” carefully defined structures that can reliably reproduce known phenomena and knowledge, but configured in such a way, or coupled to other less well-defined systems, that they can produce novel, unexpected results to be explored and elaborated, and in turn become part of a new reproductive apparatus. PECE is designed to support this experimental quest for “differential reproduction,” providing both content and structures that are both stable yet open to play and experimentation. A key example is our annotation module. Many digital humanities platforms allow for the annotation of text and other media, but almost always in an entirely unstructured way. PECE researchers can choose from a set of annotation modules that present each user with a “lightly structured” set of questions; they can respond to the question as they see fit, they can skip questions, or they can add new questions that become part of the structure that subsequent researchers can respond to. Multiple interpretations of the same artifact are collected in this way; moreover, each question and response within an annotation is made discoverable and available for later, higher-level analysis in comparison to other annotations made by other researchers. Thus, our “light structure” is a close synonym to Rheinberger’s “experimental system.” 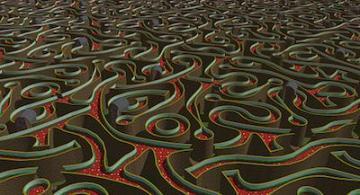