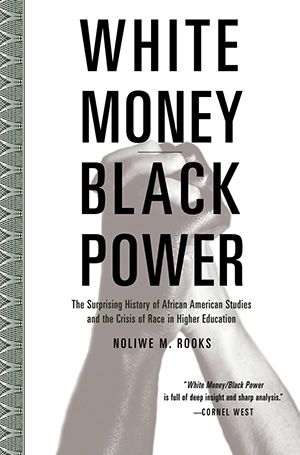 Abstract: "The history of African American Studies is often told as a heroic tale, with compelling images of fists raised in a black power salute and white administrators bowing to the demands of passionate African American students. In this watershed book, Noliwe M. Rooks argues for the recognition of an alternative and heretofore untold story-one that suggests that many programs actually began as a result of white philanthropy.
In White Money/Black Power, Rooks recounts the 1968 student strike at San Francisco State University that led to the formation of the first Black Studies programs. Hundreds of similar programs appeared across the United States between 1968 and 1972. Though it is commonly believed that these colleges and universities acquiesced to social pressure, Rooks meticulously proves that funding from the Ford Foundation, under the direction of McGeorge Bundy, led directly to the founding of these Black Studies programs. Rooks underscores that the Ford Foundation’s strategies, aimed at addressing America’s “race problem,” were essentially designed as a supplement to the white curriculum and as a means of attracting and retaining black students.
Today, African American Studies is struggling to define itself. One relatively recent development is that many students enrolled in African American Studies courses are white. Additionally, due to population shifts, increasing numbers of black students in these courses are from Africa or the Caribbean-not the United States. This radical shift, Rooks observes, makes the survival of the discipline contingent on non-African American students, which ultimately means that “blackness can mean everything and, at the same time, nothing at all.”
In this accessible and timely book, Rooks initiates an unflinchingly honest dialogue, illustrating firsthand that the only way to create a stable future for African American Studies is through confronting its complex and contradictory past."

Angela Okune: In this 2006 book by Noliwe Rooks, she details the history of African-American Studies programs in the United States and questions their future.