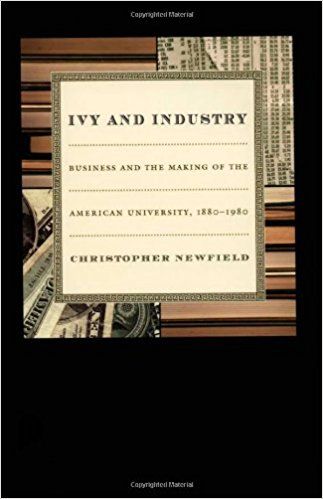 Abstract: "Emphasizing how profoundly the American research university has been shaped by business and the humanities alike, Ivy and Industry is a vital contribution to debates about the corporatization of higher education in the United States. Christopher Newfield traces major trends in the intellectual and institutional history of the research university from 1880 to 1980. He pays particular attention to the connections between the changing forms and demands of American business and the cultivation of a university-trained middle class. He contends that by imbuing its staff and students with seemingly opposed ideas—of self-development on the one hand and of an economic system existing prior to and inviolate of their own activity on the other—the university has created a deeply conflicted middle class.

Newfield views management as neither inherently good nor bad, but rather as a challenge to and tool for negotiating modern life. In Ivy and Industry he integrates business and managerial philosophies from Taylorism through Tom Peters’s “culture of excellence” with the speeches and writings of leading university administrators and federal and state education and science policies. He discusses the financial dependence on industry and government that was established in the university’s early years and the equal influence of liberal arts traditions on faculty and administrators. He describes the arrival of a managerial ethos on campus well before World War II, showing how managerial strategies shaped even fields seemingly isolated from commerce, like literary studies. Demonstrating that business and the humanities have each had a far stronger impact on higher education in the United States than is commonly thought, Ivy and Industry is the dramatic story of how universities have approached their dual mission of expanding the mind of the individual while stimulating economic growth."

Angela Okune: This 2003 book by Christopher Newfield traces major trends in the intellectual and institutional history of the research university from 1880 to 1980. He looks especially at the connections between the changing forms and demands of American business and the cultivation of a university-trained middle class.