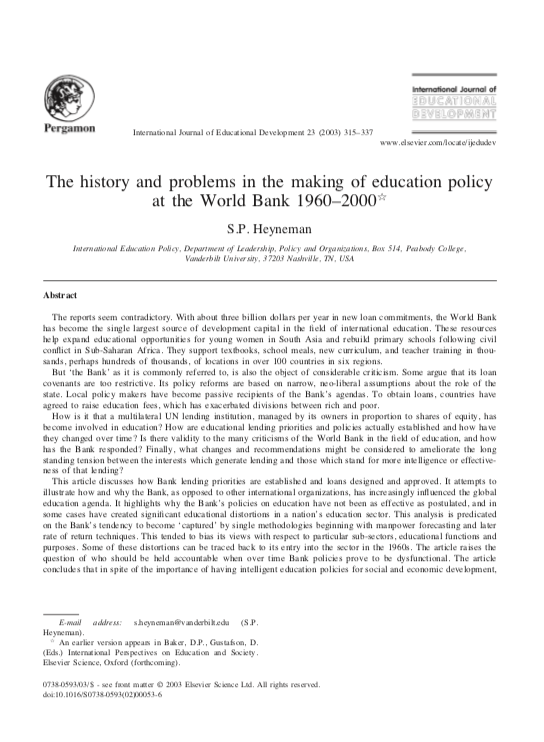 Abstract: "The reports seem contradictory. With about three billion dollars per year in new loan commitments, the World Bank has become the single largest source of development capital in the field of international education. These resources help expand educational opportunities for young women in South Asia and rebuild primary schools following civil conflict in Sub-Saharan Africa. They support textbooks, school meals, new curriculum, and teacher training in thou- sands, perhaps hundreds of thousands, of locations in over 100 countries in six regions. But ‘the Bank’ as it is commonly referred to, is also the object of considerable criticism. Some argue that its loan covenants are too restrictive. Its policy reforms are based on narrow, neo-liberal assumptions about the role of the state. Local policy makers have become passive recipients of the Bank’s agendas. To obtain loans, countries have agreed to raise education fees, which has exacerbated divisions between rich and poor. How is it that a multilateral UN lending institution, managed by its owners in proportion to shares of equity, has become involved in education? How are educational lending priorities and policies actually established and how have they changed over time? Is there validity to the many criticisms of the World Bank in the field of education, and how has the Bank responded? Finally, what changes and recommendations might be considered to ameliorate the long standing tension between the interests which generate lending and those which stand for more intelligence or effective- ness of that lending? This article discusses how Bank lending priorities are established and loans designed and approved. It attempts to illustrate how and why the Bank, as opposed to other international organizations, has increasingly influenced the global education agenda. It highlights why the Bank’s policies on education have not been as effective as postulated, and in some cases have created significant educational distortions in a nation’s education sector. This analysis is predicated on the Bank’s tendency to become ‘captured’ by single methodologies beginning with manpower forecasting and later rate of return techniques. This tended to bias its views with respect to particular sub-sectors, educational functions and purposes. Some of these distortions can be traced back to its entry into the sector in the 1960s. The article raises the question of who should be held accountable when over time Bank policies prove to be dysfunctional. The article concludes that in spite of the importance of having intelligent education policies for social and economic development, there is no single international organization to effectively provide them. The article suggests three options for changing international organizations so as to deliver better analytic work, more intelligent policies and more effective programs of education assistance."

Angela Okune: This 2003 article by Stephen Heyneman (who worked for the World Bank for 22 years) analyzes World Bank approaches to education policy in Africa and highlighted how Bank lending priorities are established and loans approved. Heyneman argued that the Bank's policies have created significant educational distortions in a nation's education sector because of the Bank's tendency to become "captured" by single methodologies, specifically "manpower forecasting" and "rate of return techniques".