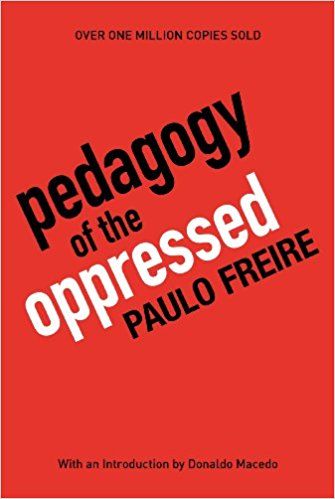 Abstract: "First published in Portuguese in 1968, Pedagogy of the Oppressed was translated and published in English in 1970. The methodology of the late Paulo Freire has helped to empower countless impoverished and illiterate people throughout the world. Freire's work has taken on especial urgency in the United States and Western Europe, where the creation of a permanent underclass among the underprivileged and minorities in cities and urban centers is increasingly accepted as the norm."

Angela Okune: Paulo Freire's "Pedgagogy of the Oppressed" is one of the most influential works on education in the twentieth century. He argues that education should enable the oppressed to regain their sense of humanity in overcoming their condition and advocates for "dialogical teaching" which creates a process of learning and knowing that invariably involves theorizing about the experiences shared in the dialogue process. Freire's approach to education is seen by some as an extension of Frantz Fanon's articulation in "The Wretched of the Earth" (1961) of a need to provide "native populations" with an education which was simultaneously new and "modern" (rather than traditional) and also anti-colonial (not simply an extension of the culture of the colonizer). Freire held that the acts of teaching and learning are political acts in themselves and held this to be a main tenet of critical pedagogy.