It probably shouldn't have surprised me that, at a recent meeting of social scientists I took part in where questions about "interpretation" were front and center, we never got around to talking about interpretation directly: what do we think we're doing when we're doing interpretation? What does it mean, "to interpret?" Is "to analyze" an appropriate substitution? Does it matter that we can speak without any qualms at all about  interpreting a text, but no one would talk about interpreting a soil sample--we analyze those. Maybe everyone on the room could sense some black hole opening up with the question of interpretation, took one peek in and quickly turned away.

But maybe, now that we are so obviously in the realm of metaphor (is that where interpretation is confined to?), a black hole is actually a worm hole and will take us somewhere unexpected. Let's go in...

An interpretive statement, clearly, although by its form it may easily be taken as a statement of fact. The sky is blue. Y=2X. Diane Wilson is badass.

(Or should that be mistaken? Don't forget this difficulty.)

But for now let's accept it as an instance of interpretation, a kind of simple model for any more elaborate, extended, complex, and/or subtle sequence of signs -- an aphorism, an essay or article, even an entire book -- that an ethnographer or kindred empirical humanist might produce. What does it take to make this interpretive statement read, not as opinion or perspective or any other word sometimes equated with "interpretation," but as the plain truth it is?

And who is that reader?

And what is it, "to interpret?"

"Diane Wilson is badass" is at least a more interpretive statement than, say,

Diane Wilson is an enviromental activist.

which is also to say, isn't it, that it is a less objective statement  than

and therefore, somehow, a less truthful or reliable or empirically grounded statement such as

Diane Wilson is a leader in the San Antonio Bay Estuarine Waterkeepers that in 2019 won a $50 million court settlement with the transnational petrochemical corporation Formosa Plastics.

Those statement are much closer to if not identical in form to the blue of the sky. They are practically algebraic. I know how to back those statements up, what data I would need to link to, where I would send you for more evidence. But what would I have to show you and where do I have to send you to convince you of the truth of my statement about badassery? That you can and should take it 100% seriously?

Along similar lines: Could we say that my interpretive statement about Diane Wilson is reproducible? Meaning that another researcher--let's just say you, reader--would look at the evidence (there's more to come), consider whatever reasons I put forward on top of that evidence, and come to the same conclusion: Badass, yeah, that checks out...

More than a few people think that's what any kind of science has to do, the kind of standard any kind of true statement based on evidence, facts, or data must meet, no two ways about it.

But let's leave the reproducibility issue aside for now, with a promise to return to it (it's important!) and ask a prior question: what counts as "reasons"? What form do reasons take in what's sometimes called "qualitative analysis?" To put it slightly more abstractly and concretely at the same time: what analytic infrastructure would I need to expose -- what sets of data, what logical and methodological acts, what inventory of concepts, what recounting of steps -- to enable you, reader, to even have a chance at reproducing that statement? Corroborating or substantiating or even validating my interpretation?

Diane looks kinda badass in that photo above, doesn't she? But looks, like interpretations (whatever those are), can be deceiving. We're going to need more data. To the Internet!

To get as far outside the interpretive residues of your accumulated browsing patterns as possible, open Tor Browser, go to DuckDuckGo, and type in the string of characters “diane wilson barn”. Below is a screenshot of the first result I got: 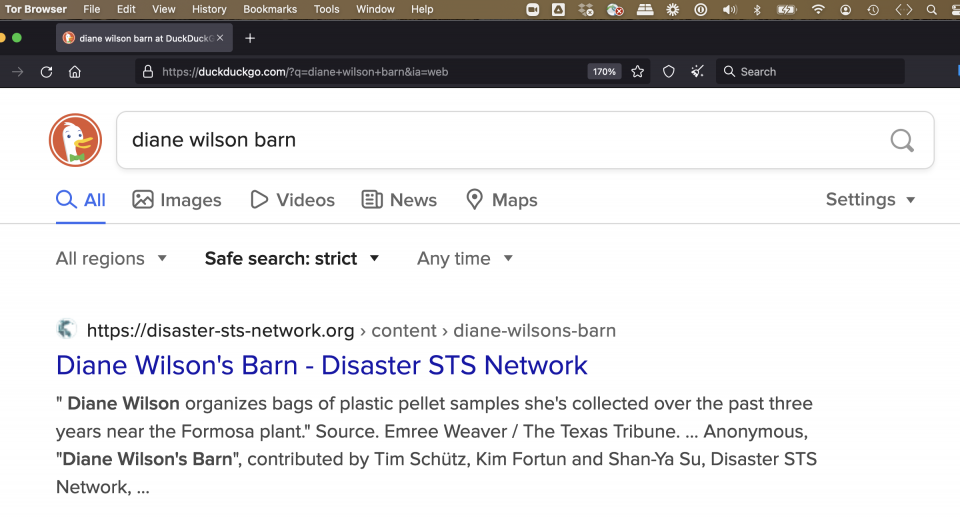 That link takes you to the photograph of Diane in her Port Lavaca, Texas barn that is reproduced above, taken by Emree Weaver for The Texas Tribune. It may not be immediate proof of obvious badassery, but it is at least data supporting it.  Qualitative data, the kind of data that doesn't fit in the cells of a CSV table, what's sometimes called "unstructured data" that is nevertheless the thing that analysis is built on or out of, or the place that analysis starts and returns to.

Although this essay opens with and will periodically circle back to Diane and her work as an environmentalist and activist, she is not my main focus here. This essay is more about statements of the kind that I've been stressing--interpretive statements, although what counts as interpretive remains to be determined--and their strength, for lack of a better word. In these terms, "truth" is the strongest statement that people can make, and it's really scientists that get to make them, and they are made on top of or out of data. Other people make "interpretations" and these are not quite as strong -- maybe not a lot weaker, but weaker. I think you know all this, without knowing exactly why. This essay tries to get you to ask why.

Even if they don't carry as much weight or force as science's truths, interpretations are the bread and butter of the social sciences. Interpretation is usually figured in the social sciences as the product of some kind of "qualitative analysis," involving methods that are supposed to be "rigorous." The photo above is qualitative data to be interpreted, or subjected to qualitative analysis, assuming for now that these are more or less the same thing, using a rigorous methodological apparatus that one has learned how to build and use (often with NSF support) and then an interpretation comes out the other end: Diane Wilson is badass. (Keep the question of how to interpret "rigorous" open for now, too.)

But in fields of the humanities like literature or history, interpretation is the product of...well, that too is one of the things that has to be figured out.

In asking about interpretation and qualitative analysis and their "status," we'll be asking about their relationships with the stuff that they are interpretations or analyses of, "the data." What steps are necessary to get from the latter to the former? What work do you have to do? And how can you "show your work" to someone else, so they can consider that work and its production, and evaluate your interpretations for themselves? And how would they do that?

If this all sounds a little geeky to you, I'm sympathetic. This essay comes from participating in a series of workshops sponsored by the U.S. National Science Foundation (NSF), concerning the qualitative social sciences in a digital age, and I'm trying to translate those geeked-out concerns and conversations among scholars to the wider audience I think they deserve.

These were sociologists, anthropologists, political scientists, and kindred scholars who work hard to make sense of the world starting, as any scientist would, by collecting data: interviews, documents, images, and other things other than numbers--qualitative data. And they use a variety of qualitative methods to analyze these data, interpreting data and people and the world in which they occur, as they have trained for years to do. And then they publish this research, confident they have made the strongest statements possible, ones that will withstand all efforts to take them apart.

Lately, though, they have become a little uneasy with this rather anodyne depiction of normal affairs in the social science. The reasons for that unease are complicated and will take some time to unfold, but they center on this difference, whatever we end up thinking it is, between truth and interpretation.

I could also simplify those complications this way: the NSF is both double and single, divided and unified.

Maybe you've heard talk of "the two cultures," although maybe you are young enough to have escaped the endless obligatory references to physical chemist and novelist C.P. Snow's 1959 essay bemoaning the widening gap between scientists and (for him) "literary intellectuals." The latter culture in this divided paradigm has since expanded to include pretty much every other form of organized knowledge, but it's the social sciences that matter as far as the NSF is concerned. It does not fund "literary intellectuals," who send their federal grant applications to the National Endowment for the Humanities. (For now, let's leave these second-order differences between the social sciences and the humanities where they are, in entirely separate agencies in the federal bureaucracy, but those differences will become important later.) So on the one hand, then, NSF is the federal agency that funds one of Snow's cultures, Science, and the other culture(s) get their support elsewhere.

On the other hand, though, NSF is divided into different Directorates, one of which (the sponsor of our workshop) is called Social, Behavioral and Economic Sciences. So if all NSF researchers are doing one thing, Science, why are anthropologists, sociologists and political scientists clustered together in one NSF subdivision, while geologists, chemists, physicists, computer scientists, and environmental scientists each get their own subdivision? Because all the latter endeavors  are quantitative, simply put, while research in the social, behavioral, and economic sciences use qualitative methods and work with qualitative data, even if some of them also have a quantitative side. So sociologists and anthropologists and political scientists are doing the same thing as researchers in the other directorates, Science, but at the same time they seem to be doing something different. This two-in-one state of affairs is bound to lead to questions, doubts, and tensions.

They share so much, all these scientists: an insistence on and working toward truth, close attention to the constant improvement of methodical, the cultivation of critique and skepticism, and perhaps most importantly, a valorization of data and constant, dedicated pursuit of more of it. It's the "qualitative" difference that makes a difference, the presence of "the interpretive" in the midst of some sciences but not, supposedly, others, that rattles the whole edifice.

So since we've asked this basic question, "What is it, 'to interpret'?," it looks like we will need to add: What is "data"?

That photograph of Diane in her barn in Texas is just a photograph to most people, but it is also data to an anthropologist, an identity I assume from time to time. It makes me happy that I have helped make this data not simply available to anyone with an internet connection, but easily discoverable. The difference is important: it's the difference that produces those search results, a difference metadata makes.

Look at all those boxes in that image up there. They are full of stuff that, we'll see, is essential to the interpretation of Diane as badass. It's tempting to say those boxes in Diane's barn are stuffed with data, environmental data used in the legal action against Formosa Plastics, but they're really not. It's a further temptation to call it “raw data,” to get all scientific about it: unprocessed data that awaits its metadata to make it useful and make sense, but I think that would be an inferior choice, although a popular and indeed hegemonic one. They're just stuffed with stuff, although there is enough of it that we could call it Big Stuff. This Big Stuff is not Big Data, but Big Data’s future anterior, to get all fancy and French about it: it will have become Big Data.

And there is no Big Data without metadata. None. It never happens. So it's not just that metadata makes the difference between the availability and the discoverability of data; in a very real and important sense, metadata makes data "data."

Now is when things start getting a little perverse....