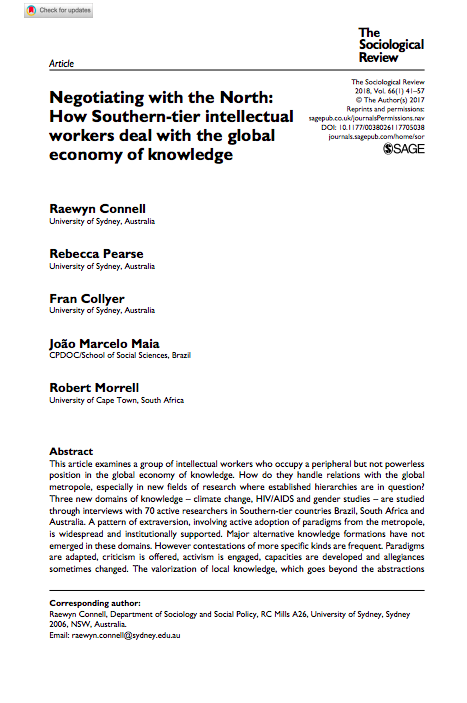 Abstract: "This article examines a group of intellectual workers who occupy a peripheral but not powerless position in the global economy of knowledge. How do they handle relations with the global metropole, especially in new fields of research where established hierarchies are in question? Three new domains of knowledge – climate change, HIV/AIDS and gender studies – are studied through interviews with 70 active researchers in Southern-tier countries Brazil, South Africa and Australia. A pattern of extraversion, involving active adoption of paradigms from the metropole, is widespread and institutionally supported. Major alternative knowledge formations have not emerged in these domains. However contestations of more specific kinds are frequent. Paradigms are adapted, criticism is offered, activism is engaged, capacities are developed and allegiances sometimes changed. The valorization of local knowledge, which goes beyond the abstractions of universalized paradigms, is particularly significant. Not stark subordination, but a complex collective negotiation characterizes the response of intellectual workers in the Southern tier."

Angela Okune: This 2018 article by Raewyn Connell et al. draws on empirical data from Brazil, South Africa and Australia to understand research labour by intellectual workers in the "periphery" (which Connell calls "Southern tier"). The authors highlight that across the fields of climate change, HIV, and gender studies, the importation of theory and method from the metropole is a taken for granted practice. However, the authors argue that this is not passive dependency, rather the authors argue that the agency of researchers can be seen at the level of personal practice. While the framework provided by the international body is used, the content and policy debates are local. In this way, knowledge becomes produced by (and also produces) a "local expert."