ANALYSIS OF COLLABORATION IN DATA GATHERING AND DATA PRODUCTION

This section foregrounds annotations based on our analytic structure specifically looking at collaboration in data production.

Analysts in the annotated set are thinking of collaboration as productive tension and transnational and across unequal economic and material realities. Two models of collaboration (a “big science” model and intimate authorship arrangements) are mentioned. Collaboration between humans - non-humans, between making knowledge and social practice, and both within and beyond the academy are also mentioned. Interestingly, Choy et al. (2009) mention smell as a material constraint that undergirds collaboration, asking: “Can humans and mushrooms really be collaborators? Might all knowledge, then, require collaboration?.”

Aellah et al. (2016) highlight the importance of maintaining the analytic distinction between public and private science. Analysts thinking about collaboration at the data collection stage were worried about how the prevalent academic institutional models for accounting for collaboration which split research contribution into fractions; and that global health research invariably involves major economic and political inequalities that should worry transnational medical researchers persistently.

Although they use the terms global North (describing it as former European colonial powers and their North American successors) and global South (the formerly colonized world), Aellah et al. (2016) note interestingly that increasingly inequality is in fact appearing between a global middle class and the vast majority rather than between countries.

Choy et al. (2009) posit an approach of focusing on connections across different geo- graphical sites, seeing the sites as socially and materially connected by a commodity. They note that they are not interested in “comparing” the site of production of a commodity with the site of its consumption, as if they were two different “cases,” rather they trace the concrete connections between production and consumption as a way to move away from connections as understood in terms of the functional requirements of capitalism or an integrated world system. Taking on such an approach engenders a sensitivity to the fact that some localities are more powerful than others and have the ability to tie others to them—and sometimes to remake the others—in ways the less powerful have little choice over. I find this approach a mindful awareness to move away from a binary classification system that continues to replicate many other binaries (producer/consumer; designer/user, etc.) and I am keen to think about how to address this in my own project with the language that I use. 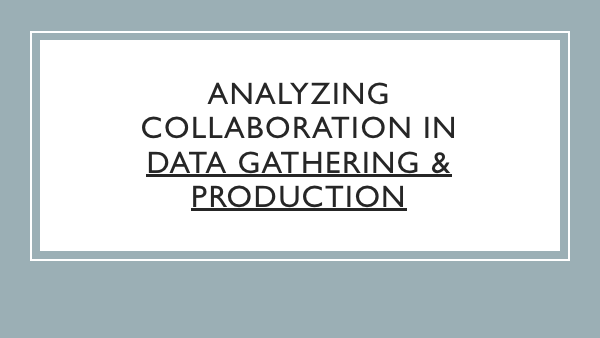